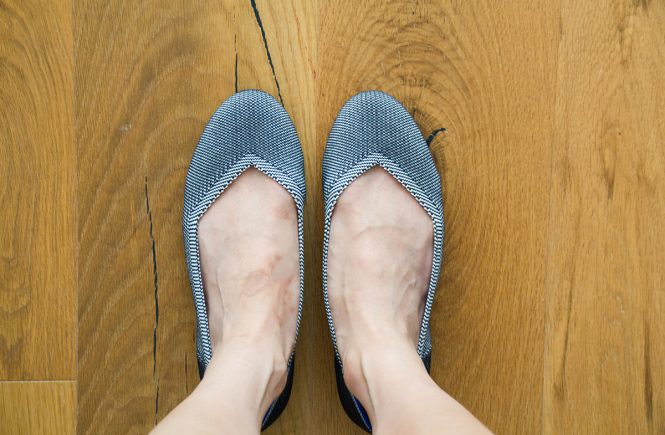 For some time now, I’ve seen Rothys often mentioned as an equally comfortable alternative to Tieks leather flats. Similar to Tieks, Rothy’s come in a variety of colors and more interestingly are made from recycled plastic bottles. After seeing no less than five girls wearing them on my commute to work one day, I decided to bite the bullet and buy a pair to conduct my own Rothy’s vs Tieks comparison.

As mentioned above, Rothy’s flats are made from repurposed water bottles. So not only are you getting a stylish flat, but you’re doing good by minimizing environmental impact! Their flats come in a variety of neutral colors and in round-toe and pointed-toe variations, which is great for those who might need a more formal looking flat. Additionally, the insole can be removed and machine-washed separately from the rest of the shoe.

In terms of style, Rothy’s round-toe flats have a similar silhouette to Tieks. You could argue that Rothy’s are more versatile for business formal workplaces, as most of the shoes have a neutral dark sole vs the Tieks signature turquoise soles. Luckily, I work in pretty casual workplaces, so this wasn’t a huge consideration for me. 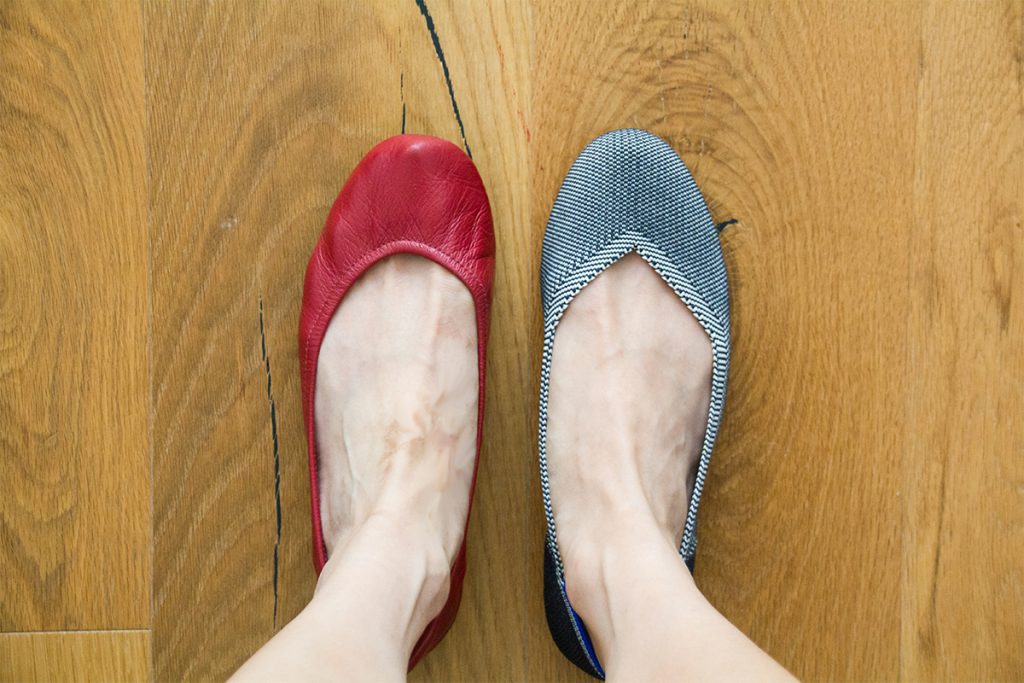 While Tieks only come in whole sizes, Rothys come in both whole and half sizes. I’m normally a 7.5, so I wear Tieks in size 7 (they stretch out over time) and I ordered the Rothys in 7.5. While the Rothys fit well lengthwise, they were loose on my feet overall – something to consider if you have narrow feet like I do. They have more give width-wise than they do length-wise.

Another major difference in fit is the heel rise. The Rothy’s come up much higher on the heel and have a scratchy trim, which gave me significant blisters after wearing them for one day at work. Depending on the shape of your heel – I would advise wearing them around at home for a little bit before taking them out for a full day.

UPDATE March 2019: Since this original review, I have found better fit luck with Rothy’s other styles, such as their Points (reviewed here and here) and their Loafers (reviewed here). While the round Flats didn’t work out, the others have — so I am upgrading from a B- to an A.

One major benefit of Tieks all-leather flats is the ability to wear them without socks and avoid smelly situations for at least a year, if not more. In my previous Tieks review, I mentioned wearing them in Europe during summertime (read: very hot and sweaty) and my shoes smelled fine after. 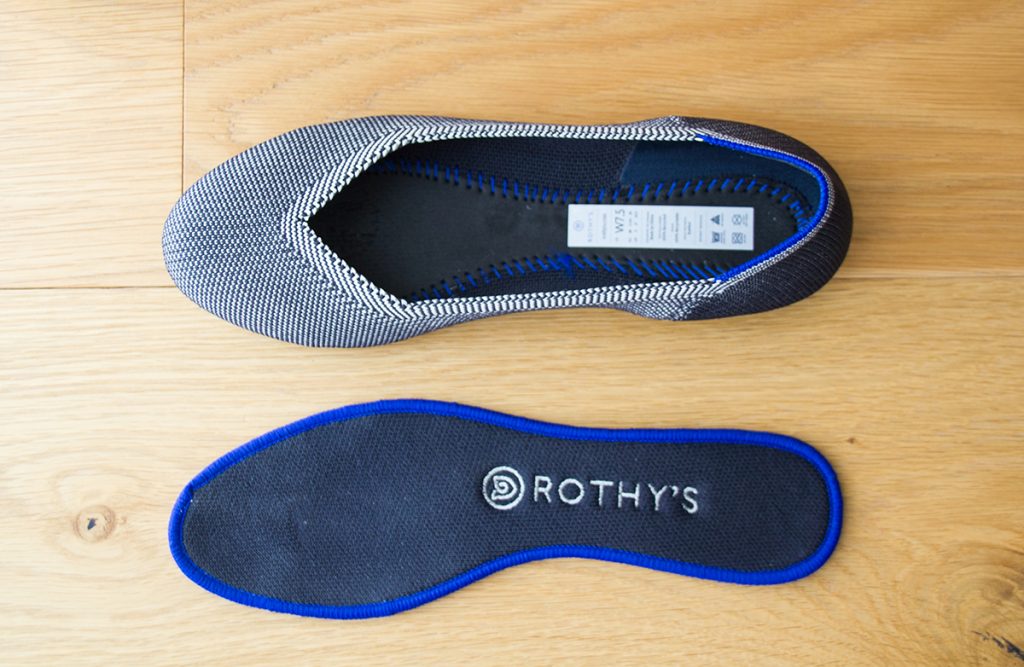 I’ve had issues in the past with synthetic shoes smelling up quickly – so I was curious if Rothy’s would be the same. After wearing mine for a day, I did start to notice a… scent. Most reviews I’ve read mention Rothy’s stinking after a week of wearing them consistently. Luckily, the shoes and the insoles are machine washable – however, it would be a bit of a pain to have to wash them so frequently. I’ve read that these Pedag cotton insoles are a great fit for Rothy’s and help reduce sweat – I haven’t tried them out myself, but will update when I do!

UPDATE March 2018: I purchased a pair of the Pedag insoles in size 7, and they fit perfectly inside my 7.5 Rothy’s Points, below: 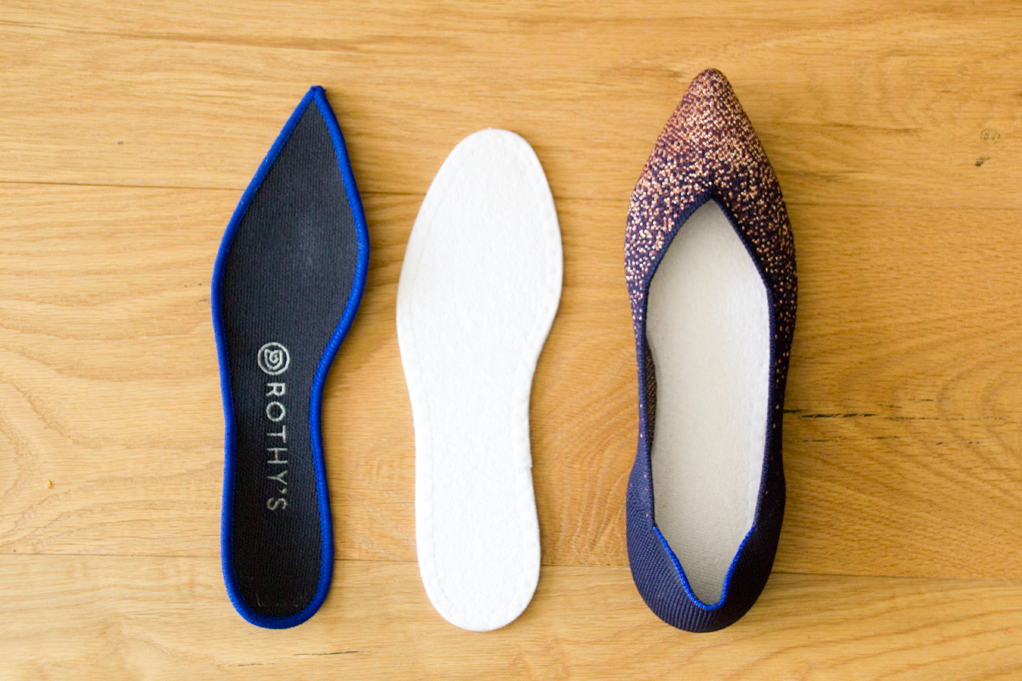 So far, they’re comfortable and a bit more breathable than the default Rothy’s insole. These don’t reach the very tip in the pointed flats, but that hasn’t affected the comfort level for me. I like having the option of multiple insoles, since I typically need to wash mine after every full-day wear!

As such, I’ve upgraded Rothys grade to a B. Buying additional insoles and swapping them out like socks every 1-2 wears will solve most sweat and smell problems.

I haven’t had the chance to fully test out Rothys yet – but at first glance, the material does seem pretty durable and less prone to surface scratches like leather. So for now, both Tieks and Rothys get the same grade.

UPDATE October 2020: I’ve now owned several pairs of Rothy’s flats (points & loafers) for 2+ years and worn them daily for commuting and work. They have held up very very well, and I expect at least another several years of life out of them! Upgrading to an A+.

While this isn’t a feature of the shoe itself, I do think customer support is an important area to consider for any 100% ecommerce brand.

Tieks is well known for its excellent customer support – especially for returns and exchanges. There’s no time limit on returns, as long as the shoes remain unworn. If you order one pair and are unsure about sizing or color/pattern, you can request Tieks to send you another size/color to compare side by side, free of charge. The latter is pretty incredible – I’ve never seen another brand offer this.

I’ve had less exposure to the Rothys team – I did email them about the heel blister issue, and their support team mentioned that I should try stretching out the shoes. Unfortunately, this doesn’t quite solve the problem of the heel back being too high. After reading through threads on the Rothys Buy, Sell, Trade Facebook group, it sounds like Rothys hasn’t invested as much into their CS team as Tieks has. To be fair, Tieks’ level of customer service is above and beyond the average retailer – almost at the same level as, for example, Nordstroms.

When I originally wrote this review in 2017, Tieks were still my one-true-pair. Especially, for my particular narrow, flat-footed feet. However, several years later, I wear my Rothy’s and my Birdies much more. This is not because of any quality reasons, but because I now prefer the Rothy’s styles more.

I still own my beloved Tieks, and especially wear them on warmer days (the leather is better for my feet than the Rothy’s synthetic soles), and am thankful my wardrobe has room for both brands! I think both brands’ shoes are great, depending on your needs.

For example, if you find Tieks are too narrow, if you have bunions or if you need a more formal flat, Rothys would likely be the superior shoe for you.

If you’re interested in trying out a pair of Rothy’s, check out the comments section of this post here for a $20 Rothy’s coupon code for your first order. You can also find an index of all my Rothy’s related reviews there.

If you’re unsure about sizing between The Flat (round-toe) and The Point, check out my latest review here.

Hope you found this review useful – would love to hear your thoughts if you’ve tried both Rothy’s and Tieks as well! 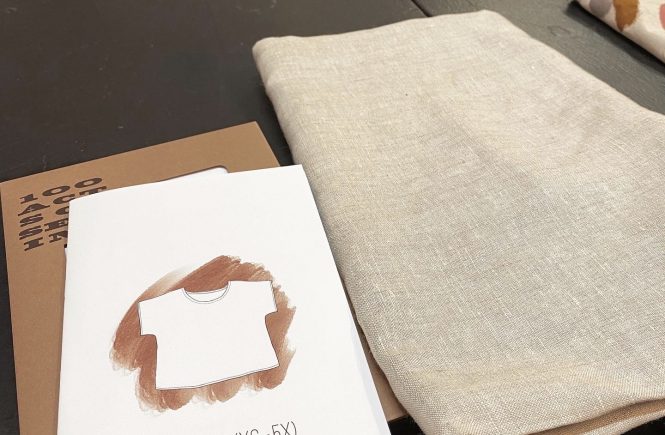 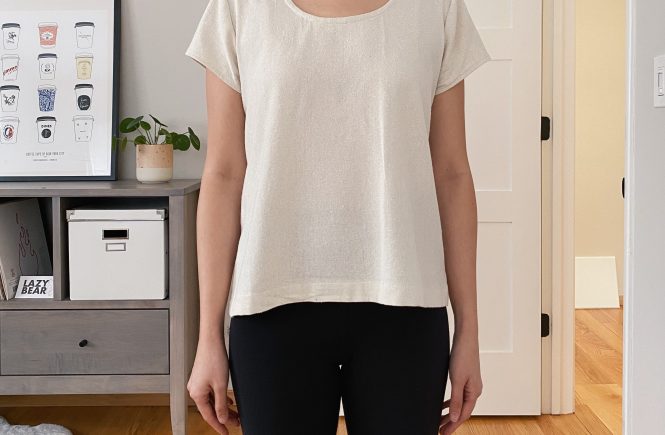 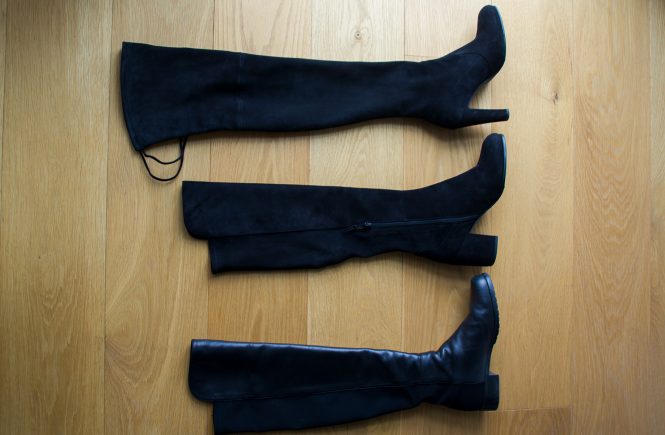 How to Store Stuart Weitzman Boots 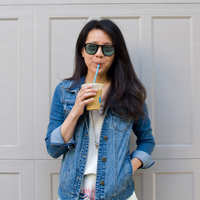