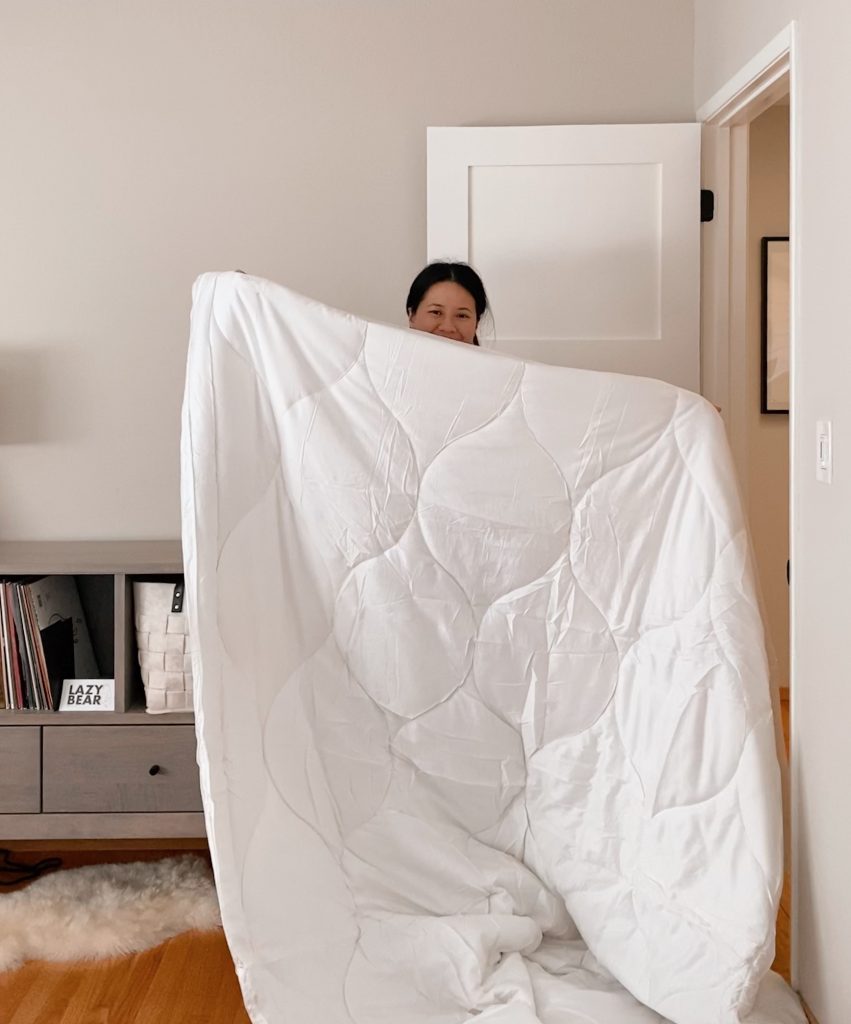 After 8 years, our duvet was on its last legs. All of the alternative down filling had migrated to the edges and corners, leaving a sad, drafty spot in the center where we need it most. Despite my many efforts to redistribute the filling, I sadly had no success.

I had heard of Buffy comforters from friends before, and decided to buy the Cloud Comforter since our original duvet was no longer manufactured. Buffy is known for their sustainable practices – the Cloud Comforter filling is made from recycled plastic into polyester, and the outer shell is made from tencel lyocell. With their 100-night return policy, I decided it was worth a try at the very least.

When our comforter arrived, I was initially surprised at how small the box was. It comes vacuum sealed within the box to save space. But after letting it air out, it surprisingly didn’t expand too much. Especially compared to down and mattresses we’ve purchased in the past.

Buffy describes their flagship comforter as “extra fluffy”. I have to say… it’s not. Especially compared to a traditional box baffle constructed comforter. But that’s not necessarily a bad thing. At the end of the day, I care most about warmth, comfort, and overall longevity. By longevity, I mostly mean in terms of the filling staying put over several years. It took us a few days to get used to the flatter profile, and we barely notice it now.

Our home has terrible insulation and easily drops down to 60F overnight in the fall, and 50F in the winter. So far, it has kept us toasty and comfortable in the chillier fall nights. My husband tends to run cold at night, and he has slept comfortably with the switch. However, I will be sure to update this review after (our admittedly Californian) winter kicks in.

Initially, I was concerned by some online reviews. I read about it being too warm and sweaty, particularly given the poly filling. We haven’t encountered this, though we are using our Parachute linen duvet cover which tends to keep temperatures regulated with good breathability.

So far, we’re pleased! I will continue updating this review as we pass through more seasons, keeping in mind that this is marketed as an all-season comforter that runs on the warmer side.

Im Kristy, a marketer based in sometimes-sunny San Francisco ⛅ This is my personal blog, where you will find my random musings, in-depth reviews, and latest sewing endeavors.