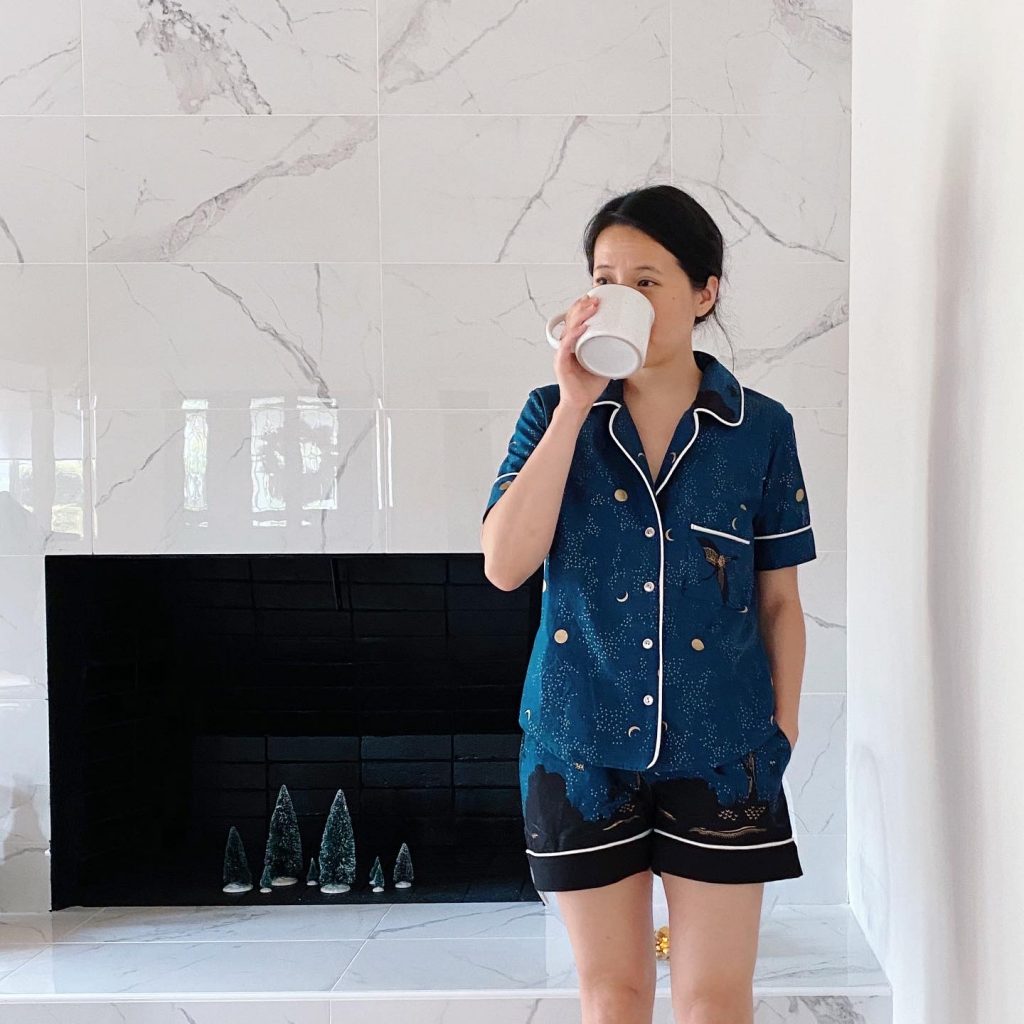 I couldn’t resist trying out the Carolyn Pajamas pattern myself, after seeing a ton of great inspiration in its Instagram tag. Given the weather, I decided to make the short-sleeve + shorts variation (View C) with a beautiful Ruby Star Society border print (similar here). Overall, they turned out wonderfully, with a ton of learnings along the way.

Big shoutout to Sew Sew Live’s sewalong videos. I must have watched these at least 3x, they were incredibly helpful for a newbie like myself.

Overall, I found this to be a really nice sew, even though it took me a while. I did make a muslin for the shorts with bias tape for the accent instead of real piping. That took me about ~2 hours, which was not bad for my first time sewing pants/shorts.

The real deal took me about 10 hours total, including cutting the fabric, with the majority of time (7+ hours) spent on the button-down top. Again, I didn’t mind how long it took, but figured this may help set realistic expectations for any beginners like myself!

According to the pattern, I’m between a Size 4 and Size 6. I made the Size 4 with smaller seam allowances and like the fit overall. It strikes the right balance between relaxed and fitted. However, in the future I may size up the bottoms to Size 6 so they are Asian Squat-proof (IYKYK). Yup, I popped a few stitches in my muslin shorts lol but that was easily fixable. Because of that, I used a ⅜” seam allowance on the real project instead of ⅝” to allow a tiny bit more room.

I also trimmed 3” off the bottom of the shirt. After the first few steps, I draped it on myself and it was too long for my short-torso-ed self. And because I placed the border print on the shorts, I wanted to make sure the top didn’t cover the cool print!

Piping: This was my first time working with any kind of piping. It’s not a requirement for this pattern – you can forego it completely, or use bias tape instead. I used the latter method and found it looked perfectly acceptable. I only decided to use real piping because I spotted some at JoAnns – a ‘why not?’ moment. This added some time to my project, as I had to keep switching out my sewing machine foot between regular and zipper foot.

Sewing a Collar & Sleeves: Prior to this, I had only sewn simple boxy tops and sleeveless tanks. So there were a lot of construction firsts for me here! The collar took me a few tries to get right, and that’s where Sew Sew Live’s YouTube videos came in very handy, along with Closet Core’s notched collar blog tutorial. Same goes for sewn-in sleeves – I learned that shirt sleeves have excess material that you have to ‘gather in’ to allow for greater arm movement. It was very satisfying to see all these components come together.

Fusible Interfacing: Another first, since I had ignored this requirement with other patterns. However, I definitely did not want a floppy collar, so I decided to actually follow instructions this time :) I played it safe with some Pellon Sheerweight interfacing, which is only a few dollars if you are able to find it at your local JoAnns. I was a little hesitant after reading some negative Pellon reviews, namely that it can bubble or separate after a few washes. But I decided to use it anyway, and take this as a lesson learned if so! So far, I’ve washed these once, and they look to be holding up perfectly fine.

Buttonholes: These always seemed so daunting, but were actually quite straightforward on my Singer 4423 machine. After watching a few YouTube tutorials, I let my machine do its magic. Does one side of the buttonhole have less stitch density than the other? Maybe. Does this bother me? Not at all.

Will I make more Carolyn Pajamas? Absolutely, though the time commitment will make this an occasional project for me. I’d love to eventually make this in a flowy rayon fabric or cozy flannel.