A Review: Rothy’s Sneaker vs Allbirds vs Vans 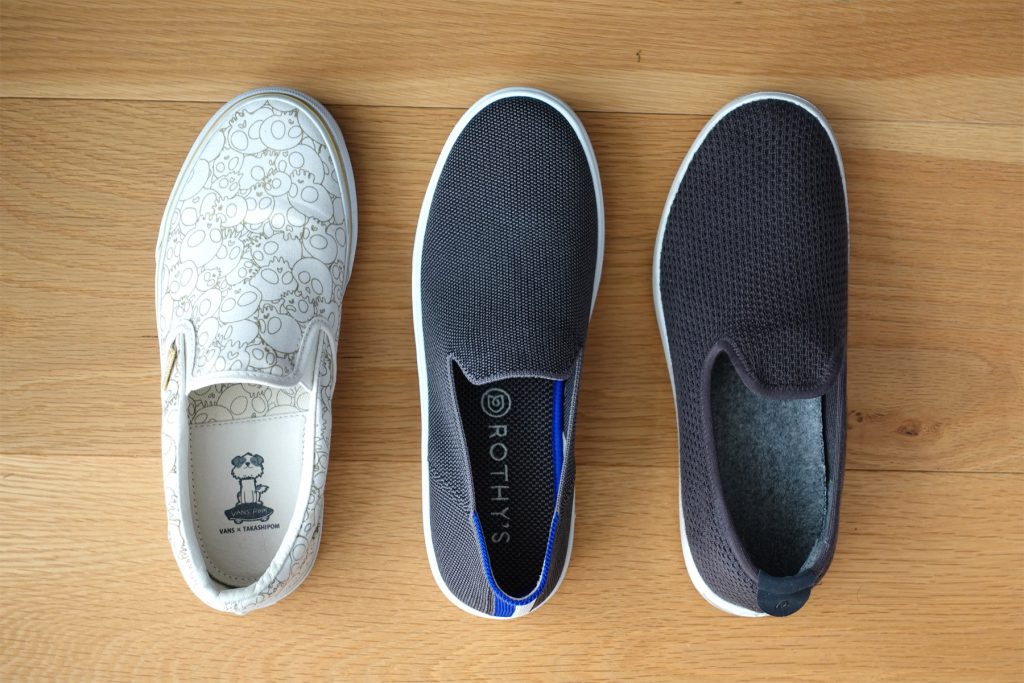 When Rothy’s announced their new sneaker style, I was intrigued and eager to give them a try. I love my Allbirds Tree Loungers, and was curious how this new washable style would compare! I also have a pair of Murakami Classic Vans that I love, but don’t nearly wear enough – and wondered where in the spectrum of slip-ons the Rothy’s Sneaker falls. Read on for my initial impressions.

The Rothy’s Sneaker fabric is made of the same stretchy recycled plastic fiber that we all know and love. For me, I’ve become accustomed to the Allbirds super soft recycled tree material, so the Rothy’s sneaker definitely felt more like a “traditional” Vans sneaker in that sense. Per the photo below, you can see the outline of my feet and toes in the Allbirds (left), but not so much in the Rothy’s (right). I don’t mind either way, though some folks might!

I was surprised at the thickness of the sole, which you can see in the photos below. No need to worry about the soles wearing thin anytime soon! Again, I’ve become used to the thinner sole in the Allbirds, and generally in my sneakers, like Nike Free Runs. So I do actually prefer the Allbirds sole over Rothy’s.

I wasn’t sure how else to describe this, but the Rothy’s shoes definitely have a “bulk” to them because of the thicker sole. They also seem to run a little wider and provide more breathing room for the feet compared to the Allbirds Loungers which are very slim and shallow in height. You can see that the Rothy’s aren’t nearly as padded as the Vans, but are in between the Vans and Allbirds.

Just like their flats, you can wash your Rothy’s sneaker in the washing machine. Again, as I mentioned in my prior review, I won’t likely do that given how… dirty SF streets are. But it’s a nice option!

Overall, the Rothy’s slip on sneaker is a nice in-between shoe for me. I’m not 100% sure that I’ll keep them since my Allbirds are so similar in color and function, but it’s nice to know there’s another option especially for the more fun colors Rothy’s has released!

Interested in trying a pair yourself? Check out the comments section of this post here for a $20 Rothy’s coupon code for your first order.

2020 Update: A few years later, and my Allbirds slip-ons still reign supreme. I’ve found nothing that matches the comfort and cushiness they provide, and bought extra insoles to prolong their life!