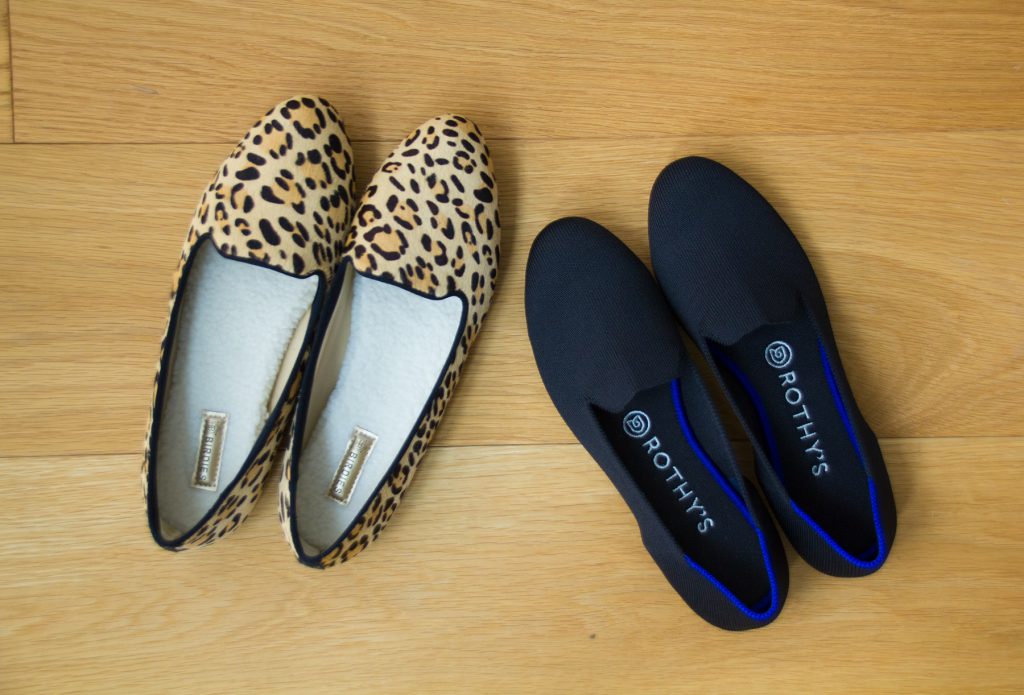 When I first wrote this post, it was a simple comparison between the Birdies Blackbird slippers and Rothy’s classic loafer. Since then, Birdies has released numerous different styles, and this post has evolved to include most of them. While I’m leaving most of the content in its original written form (as it’s still accurate!), I am also adding a table of contents for easier navigation for each update:

The Original Review: Rothy’s vs Birdies

When Rothy’s re-released their loafer style, I immediately purchased a pair to try them out. I wanted to compare them to another popular brand – the Birdies slipper, most famously worn by (soon to be princess) Meghan Markle.

Overall, both pairs have the classic loafer silhouette with no frills – though Birdies does offer a cute tassled version. They’re comfortable in very different ways, which I’ll go through in the rest of the post.

Birdies are marketed as “a slipper stylish enough to wear outside.” Personally, I would never wear shoes into the house, so I reviewed these as an outdoor shoe only. San Francisco streets are pretty dirty (we’re talking urine and feces dirty), so I would never want to track that into my apartment!

2020 Update Note: These are the original Blackbird style, which was discontinued for a bit and more recently revived with their updated quilted insole.

The most notable difference between Birdies and Rothys loafers are the insoles. Birdies come with a faux shearling or quilted cushioned insole. This is the most “slippers”-y part of the shoe, and makes them very comfortable to wear all day. Unlike Rothy’s, Birdies’ insoles are not removable or washable.

The Rothy’s loafers come with the same thin insole as their flats – not necessarily a bad thing, as the shoe moves better with your feet. I purchased these Pedag cotton insoles for my Rothy’s point flats, and they fit perfectly in my loafers as well (and help reduce any smells).

The outer material of Birdies slippers are much stiffer with more structure than Rothys. They are still comfortable, but definitely run on the wider side since they can’t stretch to accommodate different feet widths.

Rothys loafers almost feel like socks – the material is form hugging yet stretchy. In the photo below, you can see the bumps of my toes outlined in the Rothys silhouette, since the material is quite thin. This doesn’t bother me at all, but I know it can be an issue for some.

Again – both are very similar from the top view down. The biggest difference is in how the sole is structured. Birdies have a rubber sole like Rothy’s, but it’s much thinner. In the photo below, you can see the height difference between the two. I think the Rothy’s will last longer in terms of wear & tear – I can see the Birdies getting pretty scuffed up after a short period of time.

Overall, both are an excellent choice for work & play-friendly loafers. I decided to keep the Birdies over the Rothys simply because of the pattern, and will update this post with a wear and tear report after a few months!

After over a year my Rothy’s loafers are still going strong; however, I sadly had to retire my Birdies leopard loafers when the back heel was looking a bit too raggedy.

Since then, Birdies has updated their line to have more substantial soles, which is fantastic. I now have the Phoebe Slides in Jacquard Floral and am excited for them to last longer than their predecessors! You can see them styled in this post with a glimpse of the new and improved heel/sole.

I was excited for the latest addition to the Birdies line-up and swung by their San Francisco store immediately. These feel so luxurious, and have the same comfortable quilted insole which is also made of leather. I daresay they’re even more pillowy and comfortable than their fabric counterparts.

I teeter between 7 and 7.5 in Birdies, and was advised by the sales associate to size up as these stretch less than their suede counterparts. In person, they look and feel like a premium shoe – more than pictures can convey. If you’re looking for a neutral fall staple, I highly recommend checking out their latest leather flats!

Honestly, I don’t have too much to update here, as both my Rothy’s loafers and my Birdies are still going strong.

I haven’t had any *ahem* smell issues with my first pair of Birdies leather flats, which was my biggest initial concern. I’ve since added one more pair of from the limited edition VOTE collection, which was a great collaboration.

When Birdies launched their first washable flat, I of course wanted to give them a try, in the name of science and all :) Like Rothy’s, the Birdies washable flats are made of an engineered knit, though I’m not sure what the base material is. There are a two key differences between the washable Blackbird flat and its non-washable counterparts:

The washable flats fit smaller and slightly narrower. In particular, the toe box is narrower than the leather version, has less give, and will not stretch out over time. So it is recommended that you size up 0.5. I tried these on in a size 7.5, my usual size, and they were a very snug fit.

There is a removable quilted insole, great for washing separately in between whole shoe washes. It doesn’t look like they sell extras (yet), but that would be a great touch. The knit is also a more lightweight material overall, so these shoes weigh lighter than their suede counterparts. Each individual shoe weighs 4.7oz, whereas the suede version is 6.5oz.

These are a great option if you prefer light colors and are worried about upkeep, or if you have shoe odor issues with the original Birdies styles! But be sure to size up.

I’ve owned many variations of slip-on sneakers – as you can see my old Rothy’s vs Allbirds sneaker review. However, I really like the Birdies variation with fun textures such as velvet and suede. I decided to try their Swift sneaker in a pale Shell suede, which looks a touch lighter than their classic latte suede.

Overall, I like their Swift sneaker more than the Rothy’s variation. I ultimately ended up re-homing by Rothy’s slip-ons and chelsea sneakers because they were a bit too chunky. The Birdies version lands nicely in between the super lightweight Allbirds tree loungers and heavier Rothy’s slip-ons.

The leather insole is the same as those in their leather flats, and feels ultra comfortable and plush. Unlike the washable knit flats, these run a smidge larger. I could likely wear thin no-show socks with my usual size, 7.5.

I ultimately didn’t keep these because I have too many Birdies and beige / blush shoes overall. Otherwise, these would have been a great addition that can pair well with outfits in almost any season!

If you’re interested in trying out a pair yourself (they just came out with some very cute slides), you can get $20 off your first pair of Birdies with this link: http://fbuy.me/iDwO7

Interested in Rothy’s? Head on over to this post to grab a discount for both new and existing buyers alike and for links to all of my Rothy’s style reviews.